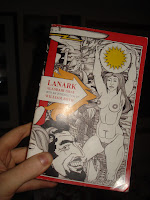 Lanark by Alasdair Gray (Canongate: 1981). A semi autobiographical epic work of fiction, in which we follow the tragic life of a flawed artistic genius in Glasgow, and then continue to follow him after he dies and stumbles his way through Gray’s version of hell, also sort of recognisable as Glasgow.

How do you blog about an epic? Here’s a book that’s taken this guy the best years of his life (30 odd of them) to finish. He’s put himself into it in pretty much every way imaginable. He’s lived with it and grown with it and become obsessed with it for decades. It landed in the world to critical acclaim and has gone down in history as a seminal novel (at least if you believe the introduction).
And here’s me, trying to reduce my opinion of it down to about 500 words (ideally less. I know how you like brevity).
So let’s make this simple. Did I enjoy it? Yes, I’d have to say I did. It has so much in it that it’s hard not to find at least something to like. From the surrealism of the hellish world that the author spends the start and end of the book in, to the everyday majesty of the middle sections. From the hopping around between timelines to the room given for an array of beautiful characters. From the heartbreak of ordinary people, to the flamboyance of the extravagant.
It’s all here. There’s variety in abundance. But there are some unifying threads too. The language (especially the dialogue) is very simple and stripped back. All the stages are vivid and painted with enough care but not too much. The honesty of the protagonist is constant (whichever world or incarnation he finds himself in) and the complexity of those around him remain intricate throughout.
There’s just so much here! And that may be the main (though probably not only) drawback of Lanark. This isn’t a book to flip through on a plane. It’s a book that you need to make room for in your life, and commit to in a fairly serious way. If you don’t, it will quickly turn into a bit of a sand pit. The best moments I had with Lanark were in quiet places, where I had an hour or so to sit down and focus on the pages in front of me.
Don’t give it space to breath, and Lanark won’t just become a drudge to get through, it’ll become downright confusing. The imagination that’s been poured into here comes with about three extra shots of espresso and seven sugars. It’s not overstating it to say it’s wild in places, and it remains wild unless you pay it the proper attention. If you do, you’re rewarded with a sense of structure and purpose that co-exists with the wildness.
I could write about this one for ages. But I’m betting you’re starting to get bored now, so I’ll get to the point.
Lanark is a great book, no doubt. It’s about as rich as they come, and it’s original, and it’s important.  But it’s only those things in the right circumstances. In the wrong circumstances, it’s confused and disjointed.
Difficult one to score then. I’ll put my finger in the air, and come up with a…
7
Pick it up if you're serious about it. It's absolutley worth your time. But if you're not, don't bother.
Next week, it’s CHRRRIISSSTMAAASS! So not sure if I’ll get around to a blog. If I don’t, I’ll definitely be doing a round up of the year though. So stay tuned. And feel free to let me know some of your highlights of the year, either as a comment to this post or to gavsbookreviews@hotmail.co.uk or tweet me @GavCollins9.
You know, if you want to.
Posted by Gav Collins at 10:07