Lights out in Wonderland - take a deep breath 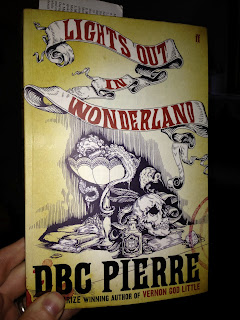 Lights out in Wonderland (Faber and Faber: 2010) Despairing at the state of modern civilisation, a man decides to kill himself. And then realises he doesn’t need to do it straight away. Cue a mission stretching from London to Tokyo to Berlin (but mainly Berlin) in which he hunts down the most spectacular good-bye he can construct.
“Large or small is the only choice in human life, my friend.” That’s a helluva quote. I probably should ask permission from someone before I reproduce quotes, but this book is so packed full of them that I couldn’t help myself.
“But this night like a moonlit churchyard – this is my night.” There’s another.
I could go on. There are tons of points in this book where I just stopped and breathed. It might be just my own perversion, it may be that not everyone shares it, but the language and the phrasing in this book made me gasp.
It’s beautiful. It really is, and it runs like a seam of gold through every page from beginning to end. It hits high notes again and again and again. It's relentless. Reminded me of when I first fell in love with Glen Duncan. But more.
Which is apt for this book. Rich language for a rich plot.
It’s a story built around decadence. Around a man hunting down a high luxury ending to his life, a spectacular gesture to the world. It thoroughly explores the limbo between decision and action. It picks apart the nature of capitalism (not in a way I fully agree with, but methodically all the same). It brings in fickle Gods and different flavours of bliss. All using the kind of language that makes me so jealous I could cry. I didn’t. But I could.
We can all make a gorgeous sentence. A single pretty idea expressed perfectly. A few can even make whole paragraphs. But to stretch out a whole book with this sort of language, working in the confines of a well structured and compelling story – that’s bloody impressive.
I read up a little on DBC Pierre. It’s not his real name. His real name is Peter Warren Finlay. He’s Australian, but he’s lived around the world, and he’s had a colourful life. Wikipedia describes him as part of the original jetset. It’s a background that gives portions of Lights out in Wonderland a vaguely self-portrait feel. In more recent times, he’s cleaned up a little, and wrote his first book on the floor of a studio flat in Balham, which is about a mile from where I’m sat now.
Still, a chat about Balham aside, I’m sure we’d have absolutely nothing in common if we met. I like my local pub. Getting home in time to watch a Law & Order before bed on a Tuesday night. Spending my weekends in the sorts of places where it’s OK to wear jeans. I’d probably find DBC Pierre pretentious, and DBC Pierre would probably find me a bore.
Which biographical details lead to me to liking this book all the more. It’s compelling escapism. An insight into other worlds. An introduction to rare people.
And all done with that language. That beautiful language.
You know what’s coming.
10 GBR
The fourth GBR maximum of all time. Second of 2012. Puts this guy in the company of Wodehouse, Waugh, and Gaiman. There’s a dinner party, right there.
Apparently GQ called DBC Pierre’s first novel “one of the 100 best things in the world” in 2003. 100 best things. That’s a wide category, and some accolade for a new book. The fact I have about five other books lined up on my shelf before I can get around to it makes me sad.
Next week, a first crack at Kurt Vonnegut.
Posted by Gav Collins at 10:18

Great book, thanks for the recommendation.

1) - the footnotes and the style, while they make sense for the character, made this quite hard to read.
I actually gave up first time round because I was trying to read it in the 10 minutes before falling asleep and this was impossible.
(thankfully, I eventually went on holiday and committed myself to it)

2) - no spoilers but the end seemed rushed, was confusing and was the ONLY point in the story where I correctly predicted what would happen next.

Still, I instantly went and bought Vernon God Little and have already recommended this one to loads of people, so I must have loved it.

See you at training,