The Lighthouse - you only get what you give 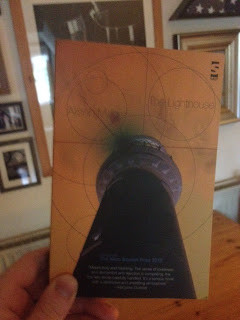 The Lighthouse by Alison Moore (Salt Publishing: 2012) Futh, recently seperated from his wife, decides to take a walking holiday through . Along the way, he briefly meets Esther, a bored wife who runs a hotel with her husband. The Lighthouse explores the lives of both through a series of flashbacks to their formative experiences.

There are a few words that pop up in a lot in reviews for The Lighthouse. “Atmospheric”. "Melancholy”.

They're all well earned descriptions. This is a sparse book. There are absolutely no explosions, no glorious resolution. Just the slow exploration of two characters whose only links seem to be their deep rooted sadness and their affection for a lighthouse shaped perfume bottle.

Not the stuff to make you jump out of your seat.

But these 192 pages made their way to the Man Booker Prize Shortlist. And I can see why. There’s a great deal of simple power about the way writes. That's something which constantly fascinates me about good writing. When someone is able to create such a specific and complete mood using only the black and white of words on a page. Moore writes incredibly economically. The language is simple, the sentences clipped. But they're so carefully chosen and put together that there's a consistent and effective feel from beginning to end.

Moore is also continually playing a game of tag with the reader's imagination, leaving truck sized gaps between the lines for you to fill in. There aren't page long descriptions of exactly how someone is thinking. No long running sentences on the minutiae of scenery. The odd plot point is left unsaid, trusting you'll infer it properly.

Which sounds like a jerk thing to say. "It's not about what she writes, it's about what she doesn't." I know that sounds like an up-yourself, painfully art-house observation, and I can honestly say I've never fully grasped the importance of the concept before. But Moore plays the card so expertly that I think I get it here. She weaves a tale which, on the surface, is fairly pedestrian, but because of the mood she creates and the questions she poses, I found myself nontheless gripped.

The issues in play and the emotions attached to them grow under the influence of Moore's writing.

There's a danger here, of course. Let this pathos, this between-the-lines beauty pass you by, and you're left with a pretty bland narrative. Read this on a crowded train for ten mins every day, without giving it your full attention, and you could easily miss the value of it. I'm not saying it's too obscure, that Moore has hidden the nuggets too deeply; just that you need to engage your own brain a little when reading this. This isn't a book where you can just sit back and expect to be entertained. It isn't a thriller or a crime novel. You need to put a little of yourself in it as well. Only a little, not a lot, but some, all the same.

It's totally worth it though. Let yourself get hooked at the beginning, and you'll be treated to some highly individual characters. Some fascinating and well developed psychology. A building, barely under-the-radar tension that remains taught thoughout.

Fail to get hooked at the beginning though, and you'll get bored. No doubt about it. But it's a pretty short book. So totally worth taking the punt.

I need to read something bad soon. There's been a glut of good scores in the last month or so. Maybe we all deserved it after the Wilbur Smith debacle. But if I'm not careful, you'll start thinking I don't mean it when I give a high score. I do. 8 GBR is a mark of a book that I hugely enjoyed. One that I'll pick up again at some distant date and re-read. One that will stick in my mind. A book I think you should pick up too (which is, after all, the point of all this).

I just seem to be reading a lot of them at the moment.

Next week, another interview+review double header. Bet you can't guess who.
Posted by Gav Collins at 10:17