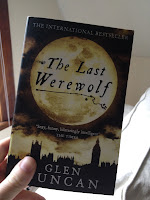 The Last Werewolf by Glen Duncan (Canongate Books: 2011) - A novel following the world's last werewolf as he finds new reasons to live a life he'd given up on.
Writing a book review blog is not all champagne flutes and red carpets. There are some real hardships involved as well.
Take for example the open ridicule to which I’m exposed every Sunday morning when a new post goes up. Or the delicate social situations that arise when you’re forced to review a book that’s been recommended by a friend.
But worst of all, the absolute pit of the sufferings to which your faithful book blogger avails himself on your behalf, is the damned enforced variety. The need to read something from a different stable week in week out. Sure, it broadens horizons and makes for a broader blog, but it also keeps me away from the books I love for long periods.
I am of course speaking about Glen. You regulars will know Glen. I’ve talked of him before, usually with a hopeless look in my eyes. If I could have, I would have read all his books by now. But I’ve resisted, because you lot don’t want review after review of Glen Duncan.
But after last week’s wash out, I thought I deserved a treat. And Glen Duncan was it.
And he didn’t disappoint (as if he would). This is his offering from last year, and it’s punctuated with the same powerful, thought provoking prose that is the hallmark of all his books.
This is, let’s be honest, a book about werewolves. It could easily descend into absolute farce. Laziness could kick in, and it could be all "frenzied roar" and "blind fury". But not in Glen’s hands (yeah, I’m calling him by his first name now. We’re serious).
Glen still makes room amongst the fast paced plot for his intelligence, using his painfully human approach to dig down and get to the essence of what it is to be a werewolf. It becomes real. You start forgetting this is the world of fantasy authors, and just get lost in the humanity of it. It doesn’t stick out, it’s not the obnoxious guy at the dinner party - Glen manages to discuss love, life, and existence in a thrillingly clever (and often beautiful) way without gate-crashing the story. It hooks you. Or at least it does me.
Which is why I wilted a little in the second half (or maybe even just the last third) of this book. It feels like Glen blew himself out a little in the first chunk. The plot eventually conquers all. The wit and charm of his earlier philosophizing disappears under the juggernaut of getting-the-story-told. Where he does try to revisit some of the earlier themes, it’s done fleetingly and (dare I say it) a little repetitively.
This is the most of his books (or the ones I’ve read, anyway). It’s more of an obvious page turner. He uses cliff hangers with less restraint. He’s getting more commercial, I can feel it. But his voice is still there. And it still blew me away in sections.
I can’t help but continue to love Glen. Really, I can’t help it. I’ve tried. And I can’t.
9
You, without a book review blog to write every week, go use your freedom to read all of Glen’s books now. Take it from a man who has to ration himself.
After that reconnection with an old flame, I might just return to Wodehouse next week. After all, I’ve only written about him once. I’m due another ration.
Posted by Gav Collins at 09:18