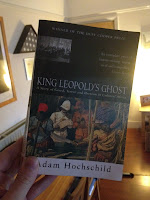 King Leopold's Ghost by Adam Hochschild (Houghton Mifflin: 1998) A history of King Leopold II of Belgium's reign in the Congo, and the individuals involved in bringing the truth of his rule to the world's attention.

Most history books tell you stuff you don’t know. Otherwise you really would get bored of them quick. But this, this told me about a major piece of the world story that I had no idea existed.

Sure, I knew about slavery. And I knew about the scramble for , and knew that wasn’t a fun era for the locals. But this, this is something other.

This book isn’t just about the horrific cruelty of an imperialistic regime in a foreign land. It’s about a major worldwide movement against it. It’s about crusaders and explorers whose story exploded out of and on to the world stage in an incredibly loud way. And then along came World War I, and it seems their voices got lost. Largely forgotten.

Maybe it has something to do with the shame of the imperialists, trying to forget a piece of history we’re not too proud of. Or maybe I was just off the day they taught this in school.

If I’m not being clear enough, in short, I was amazed.

The good history books, the really good ones, ordinarily get the cookie-cutter praise that they “read like a novel.” It’s important to take history and relate it in an entertaining way, with plot and drama and structure. Otherwise it won’t get read. And that’s exactly what’s done here.

Hochschild is helped by being given a great cast of characters, and a shocking narrative, but he stitches it together seamlessly. A little repetitive at times, and he dwells in one place for a few seconds too long here and there, but in all, it’s pretty neat and tidy.

It’s not dispassionate - he injects his own values and his own judgements at will. But they’re almost always correct. And they give the book an energy that it would be lacking otherwise.

It’s all left wonderfully open ended as well. It’s history, so there aren’t absolute winners and losers. There’s no neat resolution. Every character is flawed. Which means you put the book down at the end and you’re hungry for more. You want to discuss it and pick at it and understand it from other places.

This is good history. It’s essential history, really. It’s entertaining history. It enlightens. It twists your perspective and your gut and your soul as you read it.

I have to retrain myself here. I loved this. But the scores are about whether I think you’ll love it too. Despite everything, this is still history. It’s slower than fiction. It’s more interrogative. It’s more detailed. And that’s not everyone’s cup of tea.

I clearly have no self control.

Next week, a visit to Baker Street to see if they can keep up the pace.

Excellent. If you don't like it, blame Mrs GBR