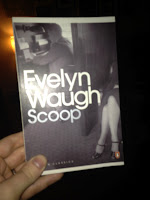 Scoop by Evelyn Waugh (Chapman and Hall: 1938) An absurd comic novel in which an identity mix up sees country loving William Boot dispatched to the African country of Ishamlia to cover the impending civil war for the Daily Beast.

Evelyn Waugh has fast become one of my favourite writers. It’s a shame, because saying that makes me sound pompous. But I don’t care. He writes fun stuff, and I enjoy reading it. So there.

In Scoop, it feels he’s in full flow. He’s funny. Not just funny, it’s a particular brand of funny - witty, satirical, slapstick, a few different funny-genres in one. There’s definite Wodehousian echoes, but it tackles more than Wodehouse ever does. Waugh’s characters are less cartoonish, but equally fantastic.

I’m not putting Wodehouse down. I’m a massive Wodehouse fan too. He got the first 10 after all, an accolade I’m reliably informed greatly pleases the custodians of the Wodehouse estate (though they’d never admit it, so don’t bother asking them).

But Waugh does more than just thoroughly entertain. He creates these amazing characters, with endearing personal flaws and comic outlooks, and he bangs them up against each other in settings that help reveal some of the absurdities the real world.

The result isn’t just amusing. It’s heart-warming. It’s depressing. It’s worrying. It’s sad. Achieving that in the context of what is basically a comic novel is some trick. He packs so much between the lines that you need to take a breath after each page.

A Handful of Dust is perhaps the novel where he achieves all of this most perfectly, but Scoop comes a close second. He makes a serious point about the power of the press, and the influence it wielded over 1st and 3rd worlds alike. He explores the relative merits of city and country life - each are presented with huge flaws, but each are inhabited by characters so skilfully suited to them that you can’t help but hanker after both. He explores loneliness, manipulation, unrequited love, the trappings of power…the list goes on. It really does. I wrote a list, and it went on and on. Then I deleted it because I know how you hate lists. But trust me, the man explores so many themes so expertly that you carry on thinking about Scoop long after you’ve put it down (once you’ve finished laughing at it).

And all of this is, or course, achieved with Waugh’s unsurpassed feel for language. Phrases, sentences and paragraphs are constructed with such economy that it blows you away sometimes. If ever you want to read language that qualifies as beautiful, pick up Waugh.

I’m painting myself into a 10 shaped corner here, so let’s try paint out again.

A Handful of Dust deserved a 10. It’s one of my favourite books ever, and I’ll go on recommending it to everyone I meet. Scoop has a lot of the same qualities. I loved the sets he built - The Daily Beast newspaper, the African country of Ishmalia, and the rural seat of the Boots. I love the characters that filled the stage and I love the story that engulfed it. But it falls short. It falls short because he did it before.

He did it in A Handful of Dust (which directly preceded Scoop). And he did it better there. He raised the bar, and couldn’t quite jump it a second time. Only just nicked it with a trailing toe-nail, but un-cleared nonetheless. It wasn’t quite as heartbreaking. Some of the elements were a bit too recycled. It fell short by about 1 point.

Pretty darn fantastic. Might need to cut myself off Waugh for a month or two.

Next week, a third run at a graphic novel, this time one recommended by Brother-of-.
Posted by Gav Collins at 09:23