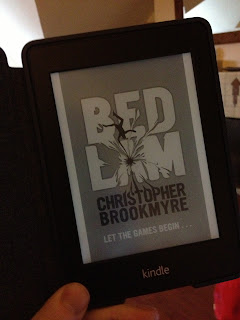 Bedlam by Christopher Brookmyer (Orbit: 2013) A Stirlingshire computer geek gets transported into a world seemingly made up of every computer game he's ever known. The mystery deepens as timelines get confused, and he finds himself in the middle of a battle, unsure what he's actually fighting for.

(one, two…wait for it…three) SCI-FI!!!
I haven’t done a proper sci-fi book on GBR yet. Not a proper one anyway. So when this came up on my Amazon-recommends list, I thought I’d take the plunge. Some guy stuck in a computer game world, battling his way through moral dilemmas and laser canons? Go on then.
Of course, the “stuck in a computer game” thing should probably have been left alone after Tron. They nailed it there. But what the hey, this sounded like fun, so in I went.
And thus repeated something that has become a worryingly familiar pattern of late. A book that I started out enjoying. And then quickly grew a little tired of. And ended up actually disliking really rather a lot.
The problem here is (and I say this with full awareness of how ridiculous I’m being) the believability of it. I don’t mean the plot. I’m happy to leave logic and skepticism at the door when sci-fi is concerned. I mean believability in the writing – the dialogue, the thought processes of the characters, the relationships that the story turns on.
And it started so well. In the first few chapters, I  liked the wit on display. The geeky references (I especially liked a reference to Buffy season 6 episode 17). But it didn’t take too long before the wit started to curdle and take on a distinctly cheesy tone. The one liners, the out-there analogies, the quirky uses of language – it all ended up just coming off as hammed up. (Cheese AND ham? I really have been eating too many sandwiches recently. But you get my meaning).
It got to the point where I was reading this in a permanent state of cringe. There was just zero about the dialogue that was natural. Zilch. Every sentence dripped with premeditation, and was delivered without even an attempt at subtlety. Which may have been bearable if it was consistently funny. But it wasn’t.
I know, I know, it’s sci-fi, right? It should be allowed a bit of cheese. A bit of too-slick wit. A large helping of contrived come-backers that wouldn’t work in any other genre. I absolutely recognize that, but the problem is it doesn’t matter what the genre, if I’m left dreading what’s coming every time a piece of dialogue is opened, I’m just plain not going to enjoy the book. Brookmyre utterly failed to bed in the sci-fi hallmarks in a way that doesn’t have you begging for the book to end.
Wow, having typed that, it now seems a little harsh. The plot to this was decent. The concept was actually a bit brilliant. Some of the characters were decently well conceived (if not particularly convincingly presented). And…
No! No excuses. I have a pretty high tolerance for sci-fi cheese. I’ve been known to be partial to it in fairly large helpings in the past. Firefly does it well. Buffy does it well. Bedlam does not do it well.
3 GBR
I’ve not wanted to get to the end of a book so much in quite some time.
Next week, something a bit biblical. (Not the Bible).
Posted by Gav Collins at 09:48 No comments:

The Innocents - an odd sandwich

The Innocents by Francesca Segal (Vintage: 2013) Following the lives being lived in a Jewish enclave of North London, centred around Adam and Rachel, a young couple hurtling towards marriage until Ellie (Rachel’s prodigal cousin) comes on the scene and threatens to turn everything upside down.
Hmmmm, ok. I went on a bit of a turnaround with this book. I was pretty sold on it for a long time. I was humming along quite nicely, entertained by the story and the people and the world they lived in. And I’d pretty much decided this was a book I was going to enjoy; another high score for 2013, and a deserving winner of the Costa First Novel Award.
But then something pretty unprecedented happened. About three quarters through., I completely changed my mind. That’s pretty rare, no matter what you’re talking about – books, food, tv, whatever.
It’s like I had this great sandwich. A real piece of work that I was loving. I’d finished half of it and I picked the second half up with dripping mouth and wide eyes. I even continued to enjoy it, right up until I had about a quarter left.
Then it got all rubbish, and I spat the rest out. And I wondered what on earth I could have seen in the first half of the sandwich that got me going so much.
I know. That doesn’t happen, right? That’s complete make-believe. Good sandwiches are good – all the way through. But with this book, it happened.
I enjoyed it. A bunch. Then I didn’t.
I look back on the bits I enjoyed, and I see the flaws now. The plotting seems contrived. The protagonist is a twerp. Most of the supporting cast are cartoons.
But let’s give credit where it’s due. All of this was hidden from me for a while. Why? I think it’s because the writing is so good. Segal is talented, no doubt. Like mad talented. The writing is so tight and easy to read. I’ve heard time and again that the best writers make you forget they’re there, and that’s what achieves here. She writes so well that you just experience the story, and don’t get distracted by anything else.
Also, the stage is pretty good. It’s a window on a whole community that I know very little about, and seeing how it works and the characters that drive it got me hooked for a while.
But then it all fell apart. The plot is driven by the ongoing moral dilemma of the protagonist who, (and I’m giving nothing away here that you won’t get from the dust jacket), is faced with a choice between a safe, lovely life and rocking the boat by running off with his wife’s cousin. It’s an interesting dilemma, but not one that I want to hear too much about. I found myself bored of it and of him. I wanted to tell him to get something done already. All the hmming and harrring – I really stopped caring. And once I stopped caring about that, all the other cracks started to appear as well.
Where does that leave us? Well, I’m not going to tell you this is a bad book. It isn’t. It’s well written. It has a good premise. And if you have a bit more patience than I do for the emotional dilemmas of others, then you could probably convince yourself it’s got a good plot as well. But I tripped towards the end of it, and all I was thinking during the last few pages was what I was going to read next.
In my mind, I was book-cheating on it already.
6 GBR
Above average, but only just.
Next week, well I’m not sure. What am I, a fortune teller? Get away from me.
Posted by Gav Collins at 08:30 No comments:

Birdsong by Sebastian Faulks (Hutchinson: 1993). Faulks gets stuck into WW1, following the life of Stephen Wraysford as he falls in a tragic kind of love before getting whisked away by the violent events of the early twentieth century.

So I didn’t post last Sunday. Sorry about that. I felt a bit worse for wear, then got distracted by , then by lunch, then by napping. Before I knew it, it was Monday again.
It’s probably a good thing, because this book needed time to settle. There’s a bunch I want to say about it, but I know you guys don’t have the longest attention spans, so I’ll reign in the more rambling of my thoughts. Well, I’ll try.
The big thing to say (and it’s something I didn’t realise until a few days after I finished the book) is that Birdsong gets under your skin. I couldn’t stop thinking about it after I put it down. I finished the last page and, days later, still felt myself daydreaming about some aspect of it or other.

I’ve talked before about how some books make that happen simply by being long, the logic being if you spend a month reading something, it’ll end up lodging in your brain by dint of its weight if not by its quality.
And, no doubt, Birdsong probably benefits from its length in the same way. But I think it’s more than that. Ordinarily, I’m a language junkie. The sure fire way to get me panting at a book is to make the language so rich it makes you short of breath (just ask ). But Faulks doesn’t do that. There are no passages of explosive language. Instead, he gets you high on the detail.

He creates a scene, picks out some of its most subtle but beautiful components, then puts them under a microscope in a way that makes the people and places slap you in the face. It’s this careful choosing and expert exploiting of detail – not any bombastic wording – that got me hooked. It made this book stay with me long after I put it down.
Sorry, that was a bit of a rambling thought, but it felt an important one. And here’s two more (put more succinctly, just for you).
The characters in Birdsong are distinct, detailed, unusual and compelling. Almost ethereal, but without losing reality.
The pacing of the book is masterful. He softens you up with love story, and just when you’re starting to get bored of it, he plunges you into the WW1 trenches. And just when you’re getting bored of that, he takes you to the 1970s. And just when you’re getting bored of that, he wraps things up with high emotion and meaning.
Ok, so maybe not that succinct.
There were (there always are) downsides. Any book of this length is going to have treacly sections you just have to wade through. Any book with the well trodden ground of WW1 at its core will feel a little clichéd in parts.
But I can’t think badly of a book that drew me in as much as this. I can’t criticize a story that stayed with me and made me daydream for days afterwards.
9 GBR
Hot dog! It’s been a high scoring start to the year. I’m enjoying my reading a lot at the moment. Possibly too much, there seems little time for anything else.
Next week, a book which comes with the "Jewish Book of the Year" accolade to live up to. Let’s hope it does.
Posted by Gav Collins at 09:01 No comments: