Touching the Void - devil in the detail 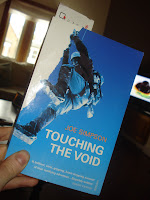 Touching the Void by Joe Simpson (Jonathan Cape: 1988) The pretty harrowing account of the very nearly fatal attempt by Joe Simpson and his climbing buddy Simon to climb the Siula Grande mountain in Peru.

I went on a walk in Thornley Woods once when I was a kid and got lost. For like a whole hour or something. Even started getting dark. Had to get a lift back home with some random farmer in the end. It was pretty scary stuff.
That’s about as close as I’ve ever got to frontier peril. So reading about Joe Simpson’s ill fated trip up a mountain somewhere in was a world away. He (and his climbing buddy Simon) faced disaster after catastrophe after calamity on their trip. They stared death in the eyes on numerous occasions, and often assumed the other had perished, never to be seen again.
This book has all the virtues of a real life disaster adventure. If it was fiction, the eyes would roll at pretty much every turn of the page. You’d throw your arms up and say “come on now, get serious, this would just never happen.” But it’s not fiction. It’s the opposite. It’s non-fiction. So all you can do is sit back and be amazed at the recollections of Joe and Simon.
And what recollections. They go to town with some of the detail.
My brother (and regular commenter) writes the odd report for his rugby club in . It’s a feat that impresses me. I can barely remember the score of a game ten minutes after I leave the pitch, never mind recall enough details to write a report with any accuracy. But my brother plays in the game, and then manages to recount all the major instances in sequence hours (sometimes days) later. 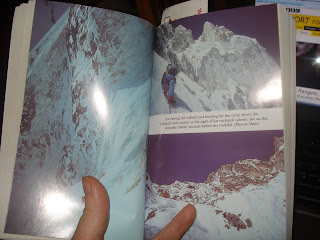 These guys though, these climbers, they’ve got down on paper every single thought, feeling, impression, technical detail…you name it, they’ve put it in here with painstaking care. And I’m guessing this was written at least a few months after the fact. It’s mind boggling.
In a lot of ways, this detail really helps. It livens up the text, and helps it go from simply being a literal telling of events into being a compelling account of how the experience effected the two climbers. The way they felt and the way they reacted, the thought that went into their decisions, the agony of the accidents and how they quantified it at the time. It’s all detail that adds richness to the text.
But the detail has two fairly annoying draw backs too. First, the climbing jargon in here is fairly heavy. I’m sure it makes sense for climbers, but there were entire scenes that I found it hard to picture as I have no idea what a “crampon” is, or a “moraine”, or even a “crevasse” is (though that one got pretty obvious after a while). You learn to skip past the jargon, but I can’t help but think the book would have been more translatable and have a more powerful visual quality without that sort of heavy detail.
The other problem with the detail is you have to start wondering where it all came from. These guys were dead on their feet. For days. Going through hell. Then months later they remember with perfect clarity the song that got stuck in their head at a particular moment, or the exact amount of screams they heard in the night. Even getting the sequence of events straight must have taken some doing. I imagine they put a bit of research in. Looked at maps and stuff like that to jog their memories. But still, the detail is at such a level that its authenticity remained a nagging doubt for me all the way through. I’m not saying any of it is untrue, just that elaboration and assumption may well have been co-writers.
To be fair though, there was enough good in this book to overcome the rest. It is inspiring in a pretty real way. Whilst the constant set-backs take on a bit of a repetitive quality, you can’t help but be amazed at how they’re conquered. (And no, that’s not a spoiler. The guys got out to write the book, so it’s fairly obvious they survived. Idiots).
And whilst a little distracting, the detail did help create a real atmosphere. I’d sit there reading this and be properly transported to the bottom of that freezing crevasse (that’s right, I’m using the word now). This book does a good job of putting the outside world on the outside.
It’s a little clichéd, but it does put things in perspective a little. Any real-life book that involves near death experiences will do that. My train may be ten mins late and the coffee shop may have short changed me this morning, but at least I’m not half way up a mountain with a broken leg and no hope of escape before I freeze to death. So, you know, suck it up.
How about a score then? Finger in the air, and it comes down with a…
6 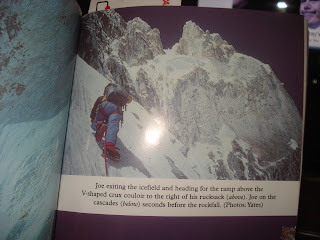 Good and bad aspects to this. But it’s definitely worth a pop. It’s a bit different from stuff I’d usually read, but there’s enough inspiration there, and enough raw emotion to make me recommend it. Also, it’s only like 200 pages, so if you don’t enjoy it, it’ll be over soon. And there’s always the pictures to look at if you get bored.
Next week, something from my wife’s book club (if I finish it in time).
Posted by Gav Collins at 09:34

Well done on getting through this without using the phrase 'I'll touch your void if you're not careful'. Not sure I could have done it.

Thanks for letting the world know about my sports journalism too. I assume the job offers will start rolling in shortly.

Look out for this weekends first team march report coming soon everyone!

P.s does your use of the word 'attempt' twice in theopening paragraph annoy you a bit now?

Fixed it. And a different typo too. Like they never existed. Which makes your comment look silly now.

Report for a first team game played in the month of march. Obvious.