The Good Man Jesus and the Scoundrel Christ - risky business 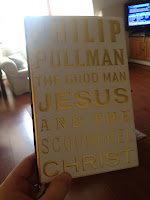 The Good Man Jesus and the Scoundrel Christ by Philip Pullman (Canongate: 2010) Philip Pullman separates Jesus Christ into two men, and retells one of the most influential stories in the world from a different perspective. The questions he raises aren’t new, but some of the answers he suggests are.
I'd meant to do a vaguely Easter review last week, but priorities shifted.

So, seven days late, Merry Easter Holiday everybody! In celebration, the most Easter related book on my shelf gets a turn on GBR.

This is part of a series where famous authors take classic myths and retell them in their own way. I know, Pullman’s being a bit inflammatory in taking the story of Christ and labelling it a myth, right? Bet he’s tons of fun at a dinner party.
That’s not an argument I want to get involved with. Not out loud anyway. No one tends to win there. Just hurt feelings and bad judgements. So I’m going to leave it alone.
Religion v atheism aside, you’ve got to love the ambition of this. One of the world’s most enduring stories, Pullman picks it up and takes complete ownership of it. Believer or not, it shows a huge amount of confidence to take the story of Christ and very publicly inject your own imagination. Similar enough in all the big ways to be recognisable, keeping all the big events, but changing contexts and characters and smaller events to turn it into something new. The result is a book that deals with massive themes in new ways, and explores the nature of storytelling.
It’s high concept. The fundamental changes reinvigorate the plot and give it new angles. The end result is something that confuses as much as it enlightens. Whether you believe the Bible or not, most of us at least treat it with a degree of respect as a symbol of the strong beliefs of others. As you’re reading this book, you can’t help but retain some of that quiet respect, but you’re also kept constantly off balance by the knowledge that this was made up by some guy in his writing shed.
It’s an odd effect. And probably the one Pullman was going for. A mixture of an ancient, timeless tone with something new and unfamiliar.
Unfortunately, to achieve it, Pullman had to be quite restricted in the language he uses. This is a man that spins a mighty yarn. He’s created entire worlds on his own, and described them vividly enough to earn mega multi-movie contracts. In this book though, in order to ape the Bible, the language is kept incredibly simple. You can hear the voice of a Church of England vicar reading the words out in monotone over a golden lectern. Which helps in creating the Bible feel. But does nothing to make this readable or compelling.
It’s a fairly short book, but it’s slow. And it’s not exciting. It only entertains in flashes, and relies a huge amount on the idea rather than the execution.
Pullman gets points for the concept here. And he gets points for achieving a consistent tone, and for successfully recreating a very specific feel. But novels should be entertaining too, in one way or another. There’s a place for literary exercises, but I’m not sure GBR is it. Not unless they can be readable as well.
4 GBR
I was pretty disappointed in this. I had high hopes. I loved the idea. But I only very mildly enjoyed the book that it begat. (You like that? That’s my own piece of Biblical language. Bullseye).
Next week, I’ll probably have finished the Hungarian thing I’m trudging through at the moment. One to look forward to, I know.
Posted by Gav Collins at 09:45