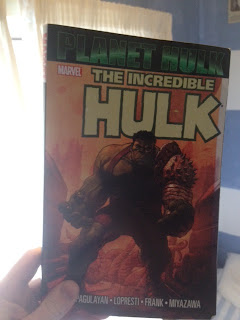 Planet Hulk by Greg Pak (Marvel Comics: 2008) The Incredible Hulk is banished from Earth and Time to go swimming in the deep end again. Give something else a try. Not entirely new if I’m honest. The whole GBR adventure has taken me here before. To graphic novel territory. The first time, it was in a sort of literary way. Then in a pseudo political way. Now into more classic territory. Doesn’t come much more classic than a bit of Hulk.

ends up shipwrecked on an alien planet with plenty of its own problems. Hulk becomes embroiled in a Civil War, leading a rebellion against a repressive emperor.

Unless you’ve kept up with Hulk’s story, you (like me) will probably not recognize a lot of Planet Hulk. Gone are the mindless rampages, the monosyllabic monster the good doctor tries to keep in check. Instead, we’re given a coherent superhero, nevertheless consigned to exile by his well meaning superhero buddies.
The set up gives Hulk a different kind of adventure. An epic which takes in new worlds and crusades. It’s a compelling context, a clever new stage on which to set Hulk loose. It allows the rise of new legends. It allows parody of some familiar human struggles. It allows a deeper, more thoughtful Hulk to emerge.
Don’t worry, the rage is still there. The “you won’t like me when I’m angry” is still there. But so is a softer side. A more contemplative side. One that can grasp the nature of a societal struggle; make an informed decision on which side to support and how to support it.
I found a lot of this entertainingly new. It was a brave turn by Marvel, and one that works. It revitalised Hulk for me. Made him more interesting. The newness of it, the imagination at work, helped this go by in a hurry. I had to consciously stop every now and then to actually look closer at the art, be careful not to let the half of the story the pictures told pass me by entirely in my hunger for the plot.
So yes, this engaged me and it entertained me. But it wasn’t without its eye rolling moments. There was a handful of twists too many. There was an implausible (and relatively pointless) guest appearance from Silver Surfer. There were elements of the story and of the character reactions that were crow barred in with no finesse. In fact, there was a general lack of subtlety to the entire thing.
Having written that, I’m immediately aware how stupid it is. Criticizing a Hulk graphic novel for its lack of subtlety? Dickhead. 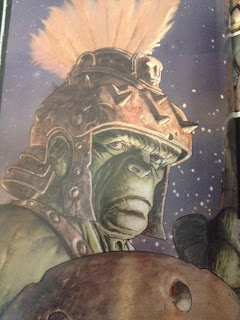 Got to get over myself. Got to look at this dispassionately. Got to ignore the fact it’s a book I’d never have picked up if it wasn’t for my GBR adventure and a strong recommendation from my brother. Did this entertain me? Did it leave me wanting to find out what happens next? Did it create characters that I liked and disliked in the way I was supposed to? Yes, yes, and yes.
But it’s a matter of degrees. They’re not yes/no questions. Yes, it entertained me, but only a little. Yes I want to know what happens next, but not enough to Amazon one-click the sequel. Yes I found the characters interesting, but also ridiculous in places, and none of them ever took on the shape of fully formed, complex personalities.
I enjoyed this more than I thought I would. I’m glad I tried it, and I’ll probably try another graphic novel at some stage. But I’m a long way from being a convert. This genre is still more likely to make up a small corner of my book shelves than overtake them completely.
6 GBR
I came. I tried. I mildly enjoyed.
Next week, an author I fear I could become as obsessed about as I am with Glen Duncan. Worrying times.
Posted by Gav Collins at 10:00

pretty fair all round i suppose. I thought this would be a good intro to classic superhero because it's a stand alone story, you don't need too much background knowledge of the Hulk (which you kind of do for the sequal to this, World War Hulk).

I'd have given it more than a 6 for the art work, and for the story, but maybe i'm more invested in the characters.

Let me know when your ready for the next graphic novel, I have some suggestions...

P.s would have commented earlier, but have been playing pirates all day.

Would be interested to hear your thoughts on Alan Moore's graphic novels- particularly 'From Hell' and 'Road to Perdition'. They're classics that bridge the gap between the wham-bam comics of Marvel and literature. You never know, there might be a 10 GBR in one of them...!

Thanks anonymous (if that is your real name, Jamie). Will give From Hell a go I think then.