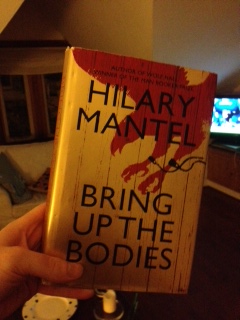 Bring up the Bodies (Fourth Estate: 2012). The second in a three part series following Thomas Cromwell’s career. Cromwell was one the major players in the Henry VIII saga. Usually portrayed as a cruel schemer, Mantel sets Cromwell up as an ambitious but ultimately misunderstood character. This second book explores his role in the downfall of Anne Boleyn.

Huzzah, I went to the Edinburgh Book Festival!

Which is a shame. I just finished her latest. I’ll try get over my disappointment at having missed her with a nice, soul cleansing confession. (Not an awkward segue at all).

My name’s Gavin, and I’m a historical fiction fan.

I said it. I admitted it right out in public and no lightening struck.

Historical fiction is cool now. Honest. Not the preserve of closet geeks any more. All sorts of genres, it seems, have emerged sleepily from public ridicule to respectability in the last ten years or so. Sci-fi, graphic novels, young adult fiction, fantasy - they’ve all caught the mass imagination at one time or another, hanging on to block buster serials and mega-movies, riding them all the way to the mainstream.

For historical fiction, Hilary Mantel is one of the biggest names in this newfound trendiness.

I read Wolf Hall a couple of years ago. It was one of ’s first reviews. Reading the review back now, it wasn’t one of my best (but who enjoys reading something they wrote nearly two years ago? Not me, that’s who).

The next instalment in the Thomas Cromwell series has the same hallmarks. Same rich writing style. Same expert scene setting. Same skill at guiding you through what is, in places, a fairly intricate plot (if you can call history a plot?)

But this book brings more as well. I felt closer to Cromwell than I did in Wolf Hall. I felt closer to all the people Mantel put down on her pages. There seemed a conscious decision to focus more tightly on a few key players and give us more time with them. Let us see them from a few different angles. It made for a more human narrative. Meant it was easier to just switch off and happily suck up the words, tasting each of them more keenly. (Bit of a stretched metaphor. Sorry. Not changing it though. I quite like it).

It feels like Mantel is really getting into her stride. She’s worked out the Cromwell she wants to portray. But more than that - she’s worked out the world she wants him to live in, and the relationships she wants him to have. Much of that was there in Wolf Hall, of course (the lady probably did her research first time around). I’m just saying in Bring up the Bodies, it all comes through so much more powerfully.

Which is just as well. The Cromwell she paints is a controversial one. Not the man judged with furrowed brow by historians, not the man defined by his actions, but a more nuanced image. She takes creative licence. She asks the “what if he was privately a really nice guy” question. She puts his choices in contexts not widely considered before. She makes much of his rags-to-riches career arc, and uses it in part to redeem him.

I’m no historian (obviously), but I know Cromwell was supposed to be a bad man. Mantels’ Cromwell is not. Ambitious, industrious, ruthless in pursuit of his agenda - all those things, but caring too. Loving. Complex.

Sorry. I know it’s time to start winding things up when I start using words like loving and complex. If I go on much longer, I’ll disappear entirely up my own behind.

I enjoyed reading this. I’m painfully aware it won’t be for everyone though. It’s the thoughtful kind of historical fiction, not the swashbuckling kind. It assumes you’ve got a bit of interest in the subject matter to begin with. It guides you through it expertly and entertainingly, but not swiftly or blood-rushingly.

I’m not saying it’s one just for the fans, but it’s not going to convert a die-hard critic of historical fiction either. Hence the 8, rather than 9 or 10.

I'm sure Hilary will be devastated.
Posted by Gav Collins at 07:28

Have you read Dissolution by C J Sansom? Might be just up your street. Mark

I thInk you've just convinced me to read Wolf Hall

Haven't read CJ Sansom - it's on the list now though!