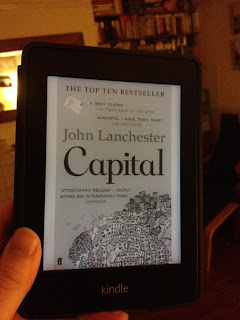 Capital by John Lanchester (Faber and Faber: 2013) Pepys Road is home to a mix of London life, from the high moneyed to the high principled. Some have roots in the street stretching back generations, some are riding a current wave of good fortune. And others simply visit to give out parking tickets. Lanchester tells us all of their stories.


“Life is just a bunch of stuff happening, one thing after the other.” Someone said that once (or something similar anyway). I’m no good at quotes, so let’s assume it was one of the usuals (Churchill, or Wylde, or Lennon, or some such). Whoever said it, there’s sense to it.


Storytelling usually relies on recognisable arcs and climaxes. There’s a great book on my shelf I got one Christmas on the seven basic plots which you can spot in the majority of stories. Most of the time, one version or another of these is told. And most of the time, it’s a departure from real life.


Real lives don’t have arcs. Resolutions. Beginnings, middles and ends. We can impose those structures on memories, but usually it’s just stuff happening, one thing after the other.


“Quit being a jerk, GBR. Just tell me about the book” right?


OK, the link I’m trying to make here is that Capital is nigh on 600 pages of stuff happening. Lights shone on a bunch of characters’ lives, all of which started before the first page and all of which carry on after the last page.


Sure, there are little swirls of arcs, but no grand thread. People’s fortunes rise and fall, they love and die, succeed and fail – all that jazz, but the overwhelming impression you get as you’re working through this isn’t of “ohmygodohmygodohmygod, I wonder what happens next.” It’s gentler than that. More real for it, but less dramatic.


Great book are (often) about escapism. About extraordinary things or extraordinary people (or both if you can get away with it). Not Capital. Everything that happens in Capital is stuff that happens every day. Well, maybe not everything, but a lot.


Even the mystery of an anonymous “we want what you have” campaign fizzles out in rather unspectacular fashion.


I’m still not sure if this is criticism or praise. Lanchester is clearly trying to lay down in words a representation of life in London (a fact screamed loudly by the title of the book). Probably more accurate to say “lives”. He jumps between a bunch of very different people with very different experiences of the capital. Each is so expertly drawn that they seem very real. Almost ordinary. In so doing, he presents a more complete picture than other novels in the current (though not entirely original) craze for using London as a muse (see Zadie Smith’s NW, or Francesca Segal’s The Innocents).


And that’s cool. I mean it; that’s cool. A hundred polaroids of London from a dozen perspectives. Variety. Reality.


But it’s not grabbing. Not profound. Not heart racing or heart breaking or heart warming. There’s little high emotion here. Not much high anything really. Just stuff happening, one thing after the other.


There are one or two currents that may have been deeper than I appreciated. Maybe this is a book that gives up more every time you read it. But when you turn the last page, you’re not sent running back to the first to find out.


I’ll be disagreed with for that, I’m sure. This is a best seller. There’s a lot positive about Capital. But on the GBR scale, which prizes pure enjoyment over all else, it falls in the middle ground.


Next week, I’m off to Scilly (hurrah!) Hope to get through something and post about it before I leave, but if not, adios until next time.
Posted by Gav Collins at 09:00