Misery - not such a bad emotion 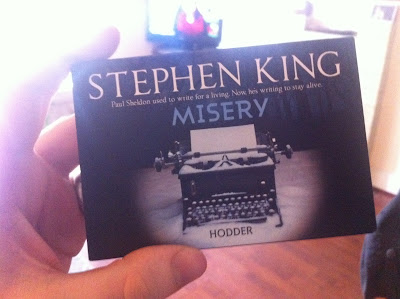 Misery by Stephen King (Hodder and Stoughton: 1987). Classic King, centring on a writer who is kidnapped by his psycho number one fan, who takes him to hell and back as she forces him to turn out one last book in a series that he’s come to hate.
Well, this feels apt. Right after going through an emotional roller coaster watching Scotland give a traditional so-close-yet-so-far performance against Argentina, here I am reviewing a book called Misery. Yeah, that pretty much sums up it up.
That’s life though I guess. Emotion followed by emotion. It’s why we follow sports – to buy in to the highs and the lows. It’s why we go on roller coasters and ghost trains – to tap into a little bit of terror. And it’s why we read book (to some extent) – to be made to feel something by the words on the page.
And most of the time, it’s those negative emotions that we chase the most. Tension. Anxiety. Heart break. Fear.
Which brings me nicely on to Stephen King. There’s a guy that knows how to stir up a nice big pot of fear. He’s done it I don’t know how many times, and he does it again here.
It’s the way he builds his stories that really sets him apart. Misery starts with a pretty terrifying situation. Not too many pages go by before you grasp the situation at hand. Where some writers would build up it up gradually, King lands you right in there and then spends the rest of the (fairly long book) building on it and building on it. He creates honest to goodness fear not by lulling you into a false sense of security then shocking you. Instead, he explores a horrific situation so completely that you’re locked inside it.
He goes off on enough tangents to give you a breather, to let you learn about the characters (all two of them), to put the fear into context. But he never lets you completely escape.
I kind of enjoyed how dated the book is as well. There are a few cultural references that remind you that this book was written in the 80s (none more so than the prominent  typewriter). But it’s more than just the references, it’s the way it’s written too. It just sounds 1980s. It’s like watching The Goonies. And I love that about it.
Main area the book falls down in? It’s the area most horror stories fall down in. (Ever so slight spoiler alert here – not really though. I knew I said I wouldn’t do spoilers, but hard to make this point without it). You knew all the way through that everything would turn out alright. There were one or two moments you started doubting it a little, but King never really makes you believe the absolute worst could actually happen. You always knew that the psycho wouldn’t win.
Otherwise, this was great. But then we all knew it would be, right? It’s Stephen freakin’ King. No surprise the guy can write. No surprise he can craft a good story. He’s done it dozens of times.
9 GBR
When you fancy reading a good book and don’t know where to turn, pick up a King. Dead cert every time.

Also, a quick note on my copy of this book. I got it as a FlipBack book – a teeny tiny book smaller than your phone (unless you're my dad), with the pages in landscape rather than portrait. Cigarette paper thin pages. You can fit it in your pocket, and you get used to the way it’s printed pretty darn fast. I’m a fan.
Next week, another claustrophobic one about people who spend most of their time in one room. Bit of a theme developing here, huh?
Posted by Gav Collins at 12:34

I feel like it's not difficult to write a book that makes you depressed or scared, but a lot harder to write one that makes you optomistic or happy. What do think about that?

I think that's what makes Roger Hargreaves such an insparation.

Films are a good way of putting the point in focus. The USA is known for all out, optimistic, American-dream type blockbusters. The UK is better known for gritty, grimy stories of the real world.

I think generally you're right though. Negativity is easier to write about convincingly than positivity. Fear I think is a separate case - it can be very tricky to get past natural scepticism and create genuine fear. We all know nothing bad is going to happen to us whilst reading the book, so making us actually feel scared can be difficult. See my review of The Small Hand for an example of where it's done badly.

Right, I should get back to work...