The Hound of the Baskervilles - stealing a march on the BBC 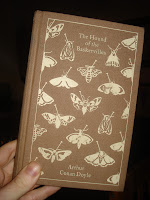 The Hound of the Baskervilles by Arthur Conan Doyle (George Newnes: 1902). A classic Sherlock Holmes novel, in which Dr Watson narrates his experiences with perhaps the world’s most famous detective as he faces peril, mystery and the English countryside in his efforts to get to the bottom of the Baskerville family curse.
I absolutely did not do this on purpose. Cross my heart. I was genuinely interested in reading a Sherlock Holmes novel, and then spotted this good looking copy in the book shop by work.
The result is a suspiciously well timed GBR entry. This evening, BBC1 have their second instalment of series 2 of Sherlock. Probs the most anticipated BBC series of the last few years. And the story they’ve reinterpreted? Hound of the Baskervilles.
Boom! Me and the BBC, totally on the same wavelength.
Of course, that means absolutely no spoilers, promise.
What did I think of it? Well, to be honest, it was exactly what I thought it’d be like. Which I’m not sure is great thing. It struggled to be any different from the picture I had in my head before I turned the first page. Which is unsurprising I guess.
Everyone knows Sherlock Holmes and his world. It’s like Robin Hood or Mr Wonka – you don’t have to have read the stories to know all about the merry men or the Oompa Loompas. Holmes is the same, which is exactly why every modern representation of him relies on injecting something other. The Robert Downey Jnr films rely on Hollywood action scenes to freshen it up. The BBC series sets the whole thing in modern day London, changing the context and allowing that to alter the characters a little as well.
﻿ ﻿
The original though is the original. It’s the source material, and so was incapable of holding any real surprises. Holmes was exactly the character I’ve heard about forever, as was Watson (though I was mildly surprised at Watson’s athleticism, having previously pictured him as a portly sidekick – more Penfold than Robin).
﻿﻿﻿﻿﻿﻿﻿ ﻿
The result is a book that relies more on the writing than any surprise ingredients. And it’s good. There’s a reason these books took off and survive more than a hundred years after they were first written. It was fluent and fast paced, well plotted with the key spikes in activity expertly timed. Action is a difficult thing to achieve in a book, much easier on film, but it’s done well by Arthur Conan Doyle. He mixes in fast paced scenes with tension building passages expertly, and it makes for exciting reading.
The first person narrative from Watson also helped give it a tinge of reality, avoiding the very real danger of the book descending completely into fantasy.
And my disappointment at the lack of new stuff (as stupid an expectation as that was) was softened a little by the sense of nostalgia and comfort that grew as the book raced on. I felt closer to Sherlock Holmes and Dr Watson than ever. They’re disappointing familiarity gave way gradually to the feeling that I was reconnecting with old friends.
So in all, I enjoyed it in a fairly mild way. I’ll definitely read another. It was fun and comfortable and exciting in places. But it suffered from its own fame a little. Don’t expect surprises around many of the corners, or anything that really raises the eyebrows.
6 GBR
Next week, a review of Cormac McCarthy’s first ever book. The guy that wrote The Road and No Country for Old Men first started churning books out in 1965 apparently, so I thought I’d go find out how that all started.
Hopefully the BBC will be showing a Cormac McCarthy film adaptation next week.
Posted by Gav Collins at 10:08

Email ThisBlogThis!Share to TwitterShare to FacebookShare to Pinterest
Labels: 6 GBR, Arthur Conan Doyle, fiction, The Hound of the Baskervilles

I agree! this kind of writing survives the centuries! M