The Farnsworth Invention - nuthin but talkin 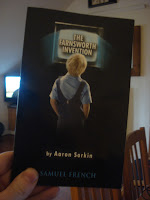 The Farnsworth Invention by Aaron Sorkin (Samuel French: 2009) A screenplay following two driven men as they race to be the first to invent television. For one, the invention itself is the Holy Grail; for the other, harnessing the power and control that the invention will give is the motivation. ﻿﻿﻿﻿﻿﻿
I have an admission to make. There are a number of men for whom I have inappropriate feelings (sorry Mrs GBR).
Matt Smith for instance. Probs my favourite actor. I know what you're thinking, and no, it's not because of Doc Who, I was on this bandwagon well before the T.A.R.D.I.S. appeared. I bear no responsibility for my actions should I ever find myself in the same room as him. None.
﻿﻿﻿﻿﻿ ﻿﻿﻿﻿﻿
Aaron Sorkin is another. And yes, I know he’s a bit of a fuck up. And I’m not impressed by his cocaine struggles. By all accounts, I understand he’s a bit of a jerk. But the man wrote The West Wing, and that’s enough for me. He need do no more.
So when I saw this screenplay on Amazon, I was one-clicking it in a heartbeat.
Now, this isn’t entirely new territory for GBR. I’ve reviewed a screenplay before, The Sunset Limited by Cormac McCarthy. But I’m no practiced reader of scripts, so I thought this would be quite fun to try out.
And to be honest, it didn’t take as much of an adjustment as I thought it would. The layout, dominated by dialogue with the odd stage direction, means you read it with a picture of the stage and actors planted firmly in your mind’s eye. With novels, I find myself picturing the story as it may be in real life. With this, I was picturing it being played out by actors in a theatre.
The danger is that you therefore lose a bit of the realism. But there are two strong factors that keep that from happening.
One is the nature of this screenplay. I have no idea how much of this really happened, but I’ll bet some of it. And that “based on a true story” factor helps inject a bit more believability to it all. What’s more, it’s a story that we can all immediately identify with - the invention of TV. For starts, we’ve all got one. And for seconds, we can all identify with that feeling of desperately trying to figure something out, trying to work out how something works. And if you can’t identify with it, Sorkin writes it so smoothly that you will find yourself right there alongside these guys whether you like it or not.
But the second factor is the one I really want to hammer on about. It’s the dialogue. Nothing’s more real than two people talking with each other. And this whole thing, save the odd bit of direction in italics, is dialogue. The most immediately engaging parts of any book are when people are speaking, and a screenplay by its nature is nothing but that.
﻿ ﻿
And this isn’t just any dialogue, this is Sorkin dialogue. I mean, drug addiction and anti-social tendencies aside, he has a gift. It’s just so sharp. True, he has a weakness for a smartest-guy-in-the-room-hero. Everything he writes has that brilliantly flawed genius character in it, sometimes more than one. But he creates them and their voices so perfectly that I can’t help but love them every time. It happens again here.
The characters aren’t real people, they’re better than real people. They’re what you want the world to be filled with. Every one of them. The genius, the business visionary, the humble hard working student, the smart strong women, the honest sidekicks – you want to be every one of them. They’re each different types of perfect person, and they’re all created through nothing else but what they say.
And that’s what’s real. There’s no long passages describing someone’s character – it begins and ends with speech and actions. And to create such perfect people with just that is impressive.
Me and Aaron, it’s a platonic admiration thing. If I’m honest, it probably drifts into a bit of hero worship when I let my guard down. So difficult to score this objectively.
Reading screenplays is fun, I’d recommend it. It’s a change of pace and a different structure to wake you up. They’re packed with nothing but talking, and in the right hands, that’s a great thing. And there are no better hands than Mr Sorkin’s.
9 GBR
Falling short of a ten for two reasons only. One, it’s not the West Wing. And two, however brilliant his characters are, I can’t help thinking he’s created them before.
Next week, either that German novella I promised you last week (well done the eagle eyed amongst you that spotted that mistake) or my second graphic novel. I haven’t decided yet. But it’s Sunday, and I refuse to make decisions on a Sunday. So there.
Posted by Gav Collins at 09:45

The f bomb? You mother reads this. For shame.

My mother is a grown woman