Next World Novella - a sparrow of a book 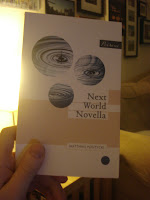 Novella by Matthias Politycki (Peirene Press: 2011) - A German Novella following Hinrich who suffers the loss of his wife thanks to a stroke. On going through her papers (with her still lying dead in the room) we’re treated to his internal monologue as he starts to reassess the nature of their relationship and the promises they’d made to each other about the next world.
I’ve ‘fessed up to a few things on this blog before. I’ve revealed (probably inappropriate) feelings for Matt Smith. I’ve admitted to enjoying a book written for kids (or “Young Adults” as is the preferred term). I’ve even laid open my complete inability to understand some sciencey stuff.
So time to drop another bomb. I’ve succumbed to a little tactical reading.
I had a 900-pager staring at me on my book shelf. But I knew reading it would mean not having new things to tell you lovely people about week after week. I know how you love new things. So I got down with some tactics - a few short books that I could finish quick, thus stockpiling some treats to spread over the weeks that I’m otherwise engaged with the overweight distraction.
It started last week with The Farnsworth Invention - which was aces, and short.
So this week’s little morsel is a German novella (translated of course, I can’t speak foreign). It was recommended as one of the best books of 2011 by some article I happened on in the Guardian (I like to read what the hippies are thinking sometimes).
I think the biggest indictment on this book is that I’m struggling to work out what to say about it. Yeah, it was nice enough. It had a few interesting twitches to keep you engaged. It explored a perspective and a character that was, if not unique, then certainly pretty rare. It was quirky and it created a distinct atmosphere diligently and with consistency.
The novella’s greatest attribute is Hinrich, the protagonist, and the portrayal of his shifting emotions. It is done expertly, allowing us to go through the spectrum with him without ever feeling contrived. Hinrich comes off as a bit of a ridiculous man, but believable all the same.
﻿﻿
But it lacked a bit of explosion. And by that, I don’t mean action. I mean that moment or quality in a book that hits home, that makes it into more than just words on a page. It could be a quiet raw emotion, or a thread of effective comedy, or a stunning backdrop faithfully explored. It could be (and has been) any number of things. But I didn’t find any of them here unfortunately.
﻿﻿﻿
﻿If this book was a bird, it would probably be a sparrow. (Stay with me on this one, it’ll make sense, I promise). Perfectly viable as a bird, the sparrow. It’s got all the right parts, and has a few tricks up its sleeve (wing) that the other birds don’t (I assume). You could find beauty in it if you really studied it, really put some effort into some dramatic nature photography, but it’d be hard work. It doesn’t have any of the more overt majesty of a golden eagle, or the obvious comedy of a flamingo. People don’t trudge out into the wilderness in waterproofs or safari gear to catch a glimpse of a sparrow. They want rarity and excitement and beauty - which are the same things I want when I read.

But sometimes, all you get is a sparrow.
6 GBR
Perfectly pleasant. But nothing more.
Next week, finally that graphic novel I’ve been promising you. And a proper one this time. I daren’t leave myself open to the criticism I got after the last graphic novel review, where I satisfied myself with the first one I found in Waterstone’s.
Posted by Gav Collins at 19:41