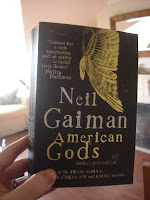 American Gods by Neil Gaiman (Headline Books Publishing: 2001). A novel revealing a hidden world of ex-Gods who wander through America’s anonymous society, looking for people to believe in them. Shadow, an ex-con and all round good guy, gets inserted into the world after meeting and getting employed by Mr Wednesday who claims to be the king of America. The jobs Mr Wednesday sends him on have Shadow wondering what’s real, what isn’t, and which side is the right one to be on.
Yup, I’m still in the middle of that massive book I started a few weeks ago. The end is in sight though. I know I’ve said that before, but I’m honestly zeroing in on it now. Next week, I’ll tell you all about it. I know, you can’t wait, right?
Big books face a few challenges. So I thought it worth a quick look at one that faced up to them all and kicked them in the butt.
Neil Gaiman is a guy with a few talents, and imagination is at the front of the queue. Big books can’t do without it. Gaiman’s imagination is a great launching pad, but it doesn’t light a cigar and sit back after that – it keeps coming up with twirls and twists that built on the concept all the way through. Yeah, a world in which forgotten gods from folklore wander through middle America stumbling towards the battle to end all battles is a pretty good starting point. But try fill 600-odd pages with just that, and it’ll get old pretty quick. Worse, it'll get contrived and buried under bad fantasy writing. Gaiman puts his imagination to work to make sure the base story becomes something more. It becomes deep and rich and real.
Nice.
Pace is huge as well. I know I’ve spoken about it before, but I’m going to assume some of you haven’t read every single one of my blog posts (shame on you) and talk about it again. Go in feet first and breathless, and it’ll be all over before you know it. It’ll never become real. Gaiman shows restraint where it’s needed and impatience where it helps. He takes a step back at just the right times. He switches place and time and character in all the right places to give you enough time with each and not too much with any. He can get wonderfully abstract and surreal, but always retains just enough structure to make sure you’re brought back to the plot before the flights of art switch from being enjoyable to being confusing.
Well played sir.
So he’s got the imagination, and he’s got enough craft about him to pace it out properly. What else? Big questions, that’s what else. For a big book, I reckon there needs to be something in it (preferably more than one thing) that makes you sit back and think. You know, make you go hmmm. And not in a hammer over the head sort of a way. It needs to be threaded through as an inseparable part of the story. There are big big issues tackled in American Gods, but they don’t drive the story and they don’t tag on behind it either. They are simply part of it, made relevant by the thrust of the plot and by the characters that you grow to know. You don’t even know it’s happening. A lot of the time, it’s only when you’ve put the book down and start thinking about it that the wider themes hit you.
Mission accomplished.
Gaiman isn’t a guy I would have read if it wasn’t for the recommendation I got. A quick google search on him, and it’s real easy to pigeon hole him into “fantasy” or “sci-fi.” And there are so many bad examples of those that I tend to steer clear unless there’s a good reason not to.
But pigeon-hole Gaiman and your life will be poorer for it. He creates reality, fantasy, suspense, poignancy, sadness, joy, grit – and he does all of this without ever crashing any of the ingredients up against each other. There’s enough in American Gods to make five books, but he blends them into one in a way that makes you love the guy.
This is a book that I think deserves to be a modern classic. It has so much in it, and it’s all packed in exactly the right way. So how can I give it anything other than
10 GBR
Only the third of GBR history (deal with it), and a very different book from the first two. Go read it. And if you do, and if you don’t like it, tell me why. But do so carefully, cos I’ll probably disagree with you, constructively of course.
Next week, the big book. Promise.
Posted by Gav Collins at 11:39

i was worried when i saw this, this is probably my favourite ever book, and one of only two books i have read more than once. i wasn't sure i could continue being related to you if you didn't like it, especially after the kicking you gave the graphic novels.

anyway, you liked it, so everything's going to be ok in the end.

keep up the good work.

Good stuff. What was the other book you read more than once?

it was a book called 'tell no one' by Harlan Coben. decent grisham style mytsery/thjriller. It had a really good twist at the end that i never saw coming, so I read it again to see if i'd just missed the signs.

Pretty good book, but not on the same level as American Gods.

By the way, just finished Weathercock by Glen Duncan. Not bad, you can have it when I see you next.

It only took me 6 months but I got through it!

Have to agree with the review. He definitely kept my interest despite the length of the story. A bit confusing in the beginning considering the number of characters introduced and their non American names :) All in all, a great story with twists I never saw coming.

Just read that Gaiman is writing a pilot episode for an HBO series following in the steps of "Game of Thrones".

I just might have to read another one of your blog entries. Good job Gav.


-Erik (The better half of team US/UK)

-Gav (the better looking half of team US/UK)