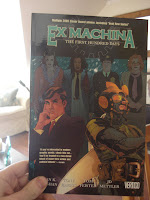 Ex Machina – the first hundred days (DC Comics: 2005). The first instalment of a series charting the trials and tribulations of Mitchell Hundred. He’s a man with the ability to control machines with his mind, but after realising the mysterious super hero route might not work for him, he decides to run for Mayor of New York instead.


With some things, I’m like the kid that says they don’t like cabbage before trying it. We are all a bit like that, right? You kind of have to be. If I watched every TV show I saw an advert for, went to the cinema for every new film, bought every new album that came out, I’d go crazy. So you filter. You pick off a few genres you know you’ve enjoyed in the past and, for the most part, you stick by them.
I’ve never really touched a graphic novel before. The one graphic novel I did try wasn’t your classic super hero type. I’d assumed I wouldn’t really like those sort. But a lot of people have told me I’m wrong. That there’s more to graphic novels than I think.
So I tried one. I sucked it up and decided to taste the cabbage before screwing my face up and saying I don’t like it. I am a grown up after all (most of the time).
I had assumed the pictures would get on my nerves. Kind of like watching a subtitled movie. Constantly switching back between the two mediums, between the words and the images – I thought that’d be frustrating. But it wasn’t. I got used to it pretty quickly. More than that, I enjoyed it. It was done well, the words and the illustrations were matched smoothly and complimented each other.
It was the pace of this that took a little longer to get used to. It dived right in from the first page, which was exciting, but meant there wasn’t any room for build up. It skipped a lot of the getting-to-know-you phase. The bits that did try to give a bit of back-story seemed clumsy and rushed. 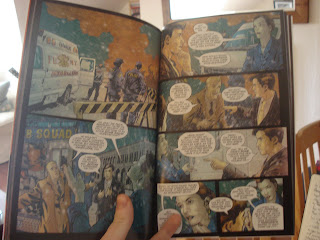 But that’s super hero stories I guess. High tension and dramatic emotion from the get go. It’s not about real people, it’s about big characters with dark motivations. It’s glossy and it’s big-screen. Ex Machina is all those things, which is fun, it’s just a shame that there wasn’t room for a bit of balance too – a breather every now and then to make the action more meaningful.
The story itself was OK. Not much more than that though if I’m honest. I’m no connoisseur of graphic novels (*cue gasps of disbelief*), but even I spotted quite a lot of recycled elements. The misunderstood hero. The accusations of vigilantism. The childhood traumas. The unreasonably evil bosses. The mystery villains. It all felt like it’d been done before.
It even tried to inject a little bit of political debate, but that went the same way as the character development. It was done in a bit of a superficial way. It felt shoe horned in, with no room to grow or gather any deeper meaning.
I’m probably missing the point. I’m imposing the same sort of criteria on this as I would on a normal book. Ex Machina achieves a lot. It’s exciting. It’s fast paced. It’s explosive and imaginative in parts. But it never really surprised me. I’d hoped that it would. I’d hoped that it would have the sort of intrigue and complexity and real tension that I always assumed graphic novels couldn’t achieve. But it didn’t.
It tasted pretty much as I expected it too. Like cabbage.
5 GBR
Maybe I just need to read more of these to get into the swing of them. Develop a taste for them. Which is probably worth doing – I know enough people that love graphic novels to believe that there must be something there that I’m missing.
Next week, back to normal books. The un-illustrated sort. A bit of Gaiman maybe. He’s a guy that does the graphic sort and the normal sort.
Or maybe I’ll have finally finished the monster of a book I’m still working my way through.
Posted by Gav Collins at 14:11

You need to try Y: The Last Man. It's kind of like the gateway drug to graphics! Plus, while I enjoyed Ex Machina, the ending was...not good. Y is fantastic throughout. Give it a try!

Good luck with your big book...I gave it up without even picking it up (replaced it with Slaughterhouse Five) because there's no way I'm going to be able to finish it in a month (when I'm also running a book a week book club).

Gateway drug huh? Sounds like I should give it a go! I'll put it on the reading list.

On the home straight with the big book now. Not sure if it's been worth it.

I'll be interested in what you think about Slaughterhouse Five. That's another one surrently sat on my shelf waiting to be paid some attention.