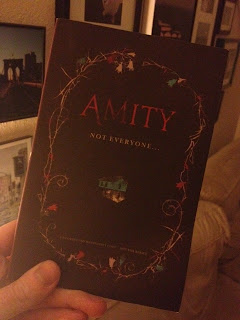 Amity & Sorrow by Peggy Riley (Tinder Press: 2013). Two sisters are scooped up by their mother and are taken from their lives in a remote cult commune. They run, and they land on an equally remote farm. Riley tells us their story as they struggle to leave their old lives behind, and make big decisions about their new ones.

Try and define the word “profound.” Go on, try it. Bet you stumble. I mean, you might get there eventually, but it’s tough, right? That’s why those dictionary writers get the big bucks. Some words are just kind of ethereal (which is another example, by the way). We kind of just know the meaning. And we certainly recognise it when we see it.

Which is a roundabout introduction to what I thought of Amity and Sorrow. This thing has profundity dripping off it. It’s soaked in the stuff. I seemed to be in a constant state of breath-half-drawn-in.

The story and the plotting take a lot of the credit for this. But the writing was a big part too. It was just so damned tight. I’ve whined on about how much I love good, tight, bare writing in the past, so I won’t bore you with that again. Suffice to say this was written with very little flab involved, which made the emotion and the…well…profundity stick out all the more.

And Riley does something else I loved. Having stumbled unsuccessfully through two novels myself, one of my big worries in writing was whether or not I had enough plot to fill the book. I was constantly thinking whether I should go back a couple of stages in the story to give myself more grist for the mill.

No such amateur worries for Riley, oh no. She starts her story when most of the big stuff has happened. On page one, pretty much everything on the dustcover blurb has already taken place. Within a few pages, you know the big bits of everyone’s back story. Sure, she does spend time later going back and filling in more blanks, and a lot of the smaller back-story details get unfolded as the book goes on, but Riley wastes no time re-hashing the minutiae of the premise. That’s confident writing, and I liked it. It got me straight into the story, no messing.

It wasn’t perfect. The high quality of large chunks made the occasional slip bark out. For example, the main three characters are so deeply drawn and so identifiable that some of the supporting cast come off as a bit cartoonish, less care having gone into them. Also, the overall story is so heart breaking and fascinating that, by contrast, some of the specific events come off as awkward; against the grain of the wider context.

Nit picking, I know. But if there are nits to be picked, I might as well tell you about them. Wouldn’t want to send you off not knowing about the nits. That’d be impolite.

Woof! Just enough nits to stop short of a ten, but we’re well and truly back on the track of some good books after that dip in late Feb/early March.

Amity and Sorry isn’t out until the end of next week, (thanks go to the Tinder Press for furnishing me with an advance copy), but you can pre-order it on Amazon here.