Train Dreams - not compatible with Come Dine With Me 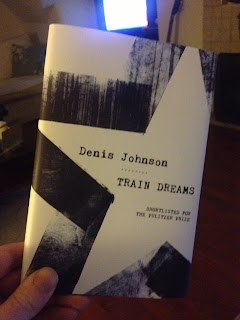 Train Dreams by Denis Johnson (Granta Books: 2012). The story of a labourer in the American mid-west at the turn of the twentieth century. He leads a simple, happy life until tragedy strikes, and he recoils into an even simpler way of life on the edges of a rapidly developing country.

I felt bad for a few days after last week’s post. I mean, giving such a low score when at least a chunk of the blame for not enjoying the book was mine. I’m not saying I felt terrible; I’m sure Toibin will lose no sleep over it. But there was guilt there, no doubt.

So I made an effort with this next one. It’s another novella. Something that shouldn’t really take more than two or three sittings to read. So I made some time, and instead of five minute chunks here and there, I read this over a few hours. And hot dog, did it pay off.

This always had pedigree. It’s right there on the cover. “Shortlisted for the Pulitzer Prize.” That doesn’t happen by accident. It happens when a good writer is slap bang at the top of their game. It happens when an unholy amount of thought and craft has gone into a piece of work. It happens when something seemingly simple is given an indefinable, magic quality. It happens here.

Train Dreams reminded me in a pretty loud way of Steinbeck. And I’m a Steinbeck fan. I’ll tell you more about that one day (it still irks me that the one Steinbeck book on GBR is perhaps the only one of his I didn’t enjoy). But for the time being, suffice to say this book had a lot of the same qualities as Steinbeck’s best writing; a gritty American nostalgia, simple but huge characters, emotion packed between the lines like gun powder. All of that.

Not a lot really happens in this book. Well, maybe that’s not true. There are life changing events. But they’re presented in a stripped down, simple way. There’s very little quickening of pace, no dramatic crescendos. And the central protagonist is a hermit who spends most of his life living alone in the woods. I have no idea how, with such a style and with this sort of plotting, books like this don’t just end up being boring. Bad ones do I guess, but the good ones (such as this) sink you into their pages with such irresistible skill that you hoover them up, content simply to be part of this slow moving world. They have an authentic quality that entertains without needing to fall back on cliff hangers or plot twists or car chases.

And if I accept some blame for not enjoying The Testament of Mary, I’m also going to grab some credit for allowing Train Dreams to flourish. I sat and I spent time with this book. Quality reading time. And I’m fairly certain all that stuff – the magic atmosphere, the subtle emotion, the character depth – none of it would have come through in such a powerful way if I read a few pages at a time whilst Come Dine With Me is playing in the background.

Go get this, clear your Sunday afternoon, and enjoy. If your Sunday’s are booked up for a while though, don’t bother.

Next week, I turn back to some non-fiction (if I finish it in time). It’s pretty boozy non-fiction though, so that livens it up a little. (You’re intrigued now, right?)
Posted by Gav Collins at 08:30