Joy - tell your mum about it 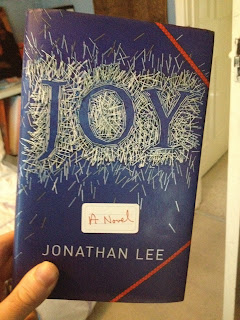 Joy by Jonathan Lee (William Heinmann: 2012) Joy is a high flying lawyer on the verge of making partner. She's also thoroughly depressed. Her decision to end her life affects those closest to her in different (and often surprising) ways.


I’ve previously rattled on about how we judge what we read. About how books can be good for a bunch of different reasons, and the only real measure once we put the book down is whether we can look our mothers in the eye and say, hand on heart, “I enjoyed that.”

I bring this up again because, if I’m 100%, strike-me-down-if-I’m-lying honest, I didn’t think I’d enjoy this book. It’s about office life. In a law firm. I work in an office. At a law firm no less. And I was worried I’d spend the whole book either picking holes in the portrayal, or being bored at having to spend my own time reading about my working environment.

At times, I did pick holes. And at times, it did feel like I was sat back in the office. But (and I’m imagining looking my mother straight in the eye here, unable to lie to the woman who brought me into the world) I enjoyed it nonetheless.

There’s a bunch of reasons why.

First (always first) is the writing. Lee plays with language and perspective expertly. He's able to get thoughts and feelings down on the page in an authentic, engaging way, using little flurries of literary technique where useful, but sitting it down between more direct sections so it never becomes too pretentious.

He doesn't just tell you what's happening - he creates rhythim where it's needed, imagery to bring emotion off the page, distinct voices to connect with. You really do get the impression as you're reading this that you're in the company of someone who loves language, and is so in command of it that he's able to reveal every corner of the plot fluently and without fatigue.

Then there’s the story itself. It’s not original. It’s about a bored office worker, haunted by her past, and determined to end it all (I’m giving no spoilers there by the way, that’s all pretty much on the dust jacket). But it is compelling. The way it’s explored and prodded and teased out. Lee takes some well trodden paths and breathes something new into them. Something I didn’t expect to get. Something I can’t quite put my finger on, but something that gripped me. As soon as I figure out what it was, I’ll let you know. Or I’ll steal it myself and write my own book. One of those two things.

Joy also has an impressive structure to it. Which sounds like something a pompous jerk of a critic would say, but stick with me on this one. I may well accidentally slip into pompous jerk mode every now and then, but when you finish the last page of this book, you'll see it too.

You almost don't realise it as you're going along, but when the crescendo is reached, you see how much pathos, how much humour, how much reality, how much everything is packed in here. You don't notice it until the end because it's all packed in with impressive talent. Everything's in the right place, no emotion overblown, nothing underplayed - just built in exactly the right way to leave you with a sense that you've just read something rich.

This kind of writing, with a plot fragmented amongst different voices, addressing some meaning-of-life flavour questions - stitching that all together without losing the readers’ interest is a tough gig. A massively tough gig. But one that Lee is up to.

There are downsides (there always is, right?) There are things I wanted more of. There were a few absurd twists that sacrificed some believability. There was the odd over-explained plot point.

But there was also originality. And discipline. And fluidity.

Two 8s in a row. Tracking just the right side of average.

Just as well. I got in touch with Jonathan Lee a few weeks ago and he was kind enough to take time and give me some great advice on a few things. Would have been terribly embarrassing if I ended up not enjoying his book.

Next week, something from the archives I think. I may have eventually caught up with myself.
Posted by Gav Collins at 09:35