Pure - not as bad as spam curry 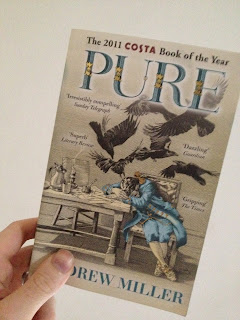 Pure by Andrew Miller (Sceptre: 2011). It's 1785 in Paris, and a young engineer is given the task of turning an ancient church and its graveyard into a new market square. Much bone excavation, labour relations, community engagement, and wine later, he begins to reevaluate his life and his place in a world on the bring of revolution.

But it’s not always a guarantor of success. Sometimes, you can squidge a bunch of good ingredients together and end up with something less than the sum of its parts. Case in point - I once tried to make a spam curry. I thought it couldn’t fail. I love spam. And (mild) curry. But it did fail. It failed a lot. It was awful, and everyone who was there will tell you the same.

It’s my spam curry experiment I tend to channel when I see something which, on the face of it, looks like it’s going to be brilliant. I approach with caution, certain in the knowledge all the right ingredients don’t always lead to greatness. Sometimes you get rocky road. Sometimes you get spam curry.

Pure is a historical novel (which I love). It’s been praised for its atmospheric narrative (another big check for me). And its epic qualities have been likened to the Ken Follett classic Pillars of the Earth (which I read years ago and still have fond memories of). Good ingredients. I hoped it wouldn’t let me down.

Well, you can stop holding your breath. It wasn’t quite a spam curry. It came together nicely. It had a bunch of quirks and tools and stylistic flurries to keep me happy. It had some deep themes, none of which were yelled in your face. There was a heartening subtlety to the whole thing. Especially in the character portrayals. Some were huge and larger than life, whilst others were barely sketched in pencil. There were figures upon whom very little time was spent, but their mystery and their shadows dominated parts of the story in a highly effective way. That’s pretty tough to achieve. Pretty impressive.

Most of all, I loved the recurring use of some consistent scene setters. There are a few factors that keep popping up, never on the main stage, always just off to the side. Always giving a hint of context, a unifying thread.

For example, the interplay of the characters with candle light pops up pretty regularly. Their dressing habits, and the significance of them. Little physical constants that aren’t part of the plot, but often point towards deeper issues. Almost like hidden keys woven in amongst the narrative.

I loved that. I felt I was discovering my own story all the way through. Which of course I wasn’t. It was just being revealed to me expertly.

So not a spam curry then. The ingredients worked well together. But could we stretch all the way to rocky road?

Before I get mired down in this metaphor (if indeed it’s not already too late), let’s skip to the score.

Really enjoyable book. The kind you’ll get more out of every time you read it.