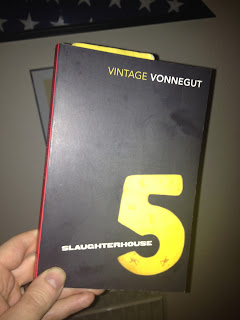 Slaughterhouse 5 by Kurt Vonnegut (1970: Jonathan Cape). An anti-war novel of the original anti-war age. Kurt Vonnegut introduces us to an American who flits forward and backward in time. We see him alternately as a middle aged optometrist, a captive in an alien zoo, touring the country as a revolutionary speaker, and watching Dresden burn in WWII.
There’s more than one way to be skin a cat. Odd phrase. I’d like to know who came up with it, and then make sure I don’t ever get too close to them. But it’s true, all the same.
Last week, I went on about DBC Pierre’s language. About its decadence and its beauty.
Kurt Vonnegut achieves beauty in a different way. Not for him the flurries of luxurious inspiration. Instead, his writing is stripped back to the bare bones. Clipped, economical sentences. Simple phrasing. Worlds and lives laid out in the bare minimum of space.
It’s difficult to do. It shows a great deal of restraint and ingenuity. High levels of concentration and a commitment to perfecting every sentence. But the result is worth it. The result is a book with a relentless rhythm.
For all the simplicity of the language, the plot provides a direct contrast. It’s intricate and fantastic. The protagonist is a time travelling optometrist who suffers alien abduction and learns a radical new way of experiencing life. He also trips through World War II in an increasingly absurd outfit.
And then he watches Dresden burn, and picks through the aftermath.
The whole book is set up to make the horror of Dresden scream out. It’s not mired in pathos. It’s couched in ridiculousness. More comedy than sentiment. The point is clear – it’s all a bit pointless. All the death and suffering and ruined lives – none of it serves a higher purpose. None of it is necessary. None of it has any wider meaning.
It’s an original way of making a well worn point. And you can see why it had so much impact when it was written. It doesn’t whine. It simply takes the bloodshed and surrounds it with an absurdity that leaches into every corner of the book.
It’s good. It’s a classic and it deserves to be.
But (crucial question) did I enjoy it?
Yes, but not outrageously. It’s clever, and it’s original, and it’s compelling in places. It still has relevance. But I didn’t fall off my seat when reading it. I wasn’t blown away like I was with DBC Pierre last week. All the power of the simple language, all the imagination; it raised my eyebrows and it made me think. But it didn’t make me howl.
I was impressed. But my socks remained firmly un-knocked off.
7 GBR
Good solid score. If you haven’t read this, you should. It’s a short read, and a worthwhile one.
Next week, a modern western. More new territory.
Posted by Gav Collins at 10:36